Lost in Havana
By Margie Goldsmith 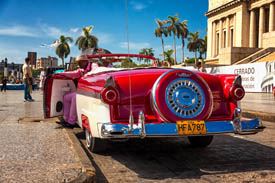 I’m lost on the outskirts of Havana, dressed in a sweaty T-shirt, shorts, and sneakers. I don’t have my cell phone but that doesn’t matter because there’s no one to call. The only other people I know in Cuba are my American teammates doing this Olympic-Distance Havana Triathlon Championship; but I’m the slowest and they’ve probably already crossed the finish line. I’d love to hail a taxi, but the road is closed because of the race. Too bad — I’d kill to be in one of those vintage 1950s Chevys or Buicks converted into taxis and blaring Cuban music. 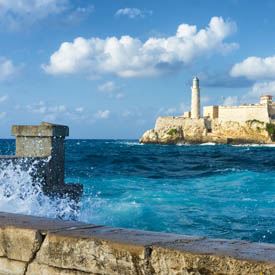 If I had not wanted to see Havana, I wouldn’t be doing a triathlon, but as an American, I have only a few choices to enter the country, and this seemed like the most fun. Canadians can book a flight with no problem and see the beautiful beaches and quaint villages and old Havana that has been trapped in a time warp since the early 1960s; unfortunately, sanctions prevent Americans from entering the country except on group trips and with special visas.

I ’m here on an “amateur sports visa” along with 35 other Americans for a four-day triathlon training camp and then the race. None of us really care about winning — we’re here to train side-by-side with the Cuban athletes and experience exuberant Havana. Cuba is economically poor but the architecture is stunning, the residents joyous, and even the streets pulsate with live music. I’m glad I have the chance to see it before the American sanctions are lifted and the island loses its charm and quaintness and turns into a major tourist destination like Miami Beach.

The Cubans are very poor, and the coaches asked us to bring soap, shampoo, clothes, sneakers, and writing materials to give away as gifts. And while they have very few material goods, when it comes to joyfulness and spirit, they must be the richest nation on earth. My Spanish is very limited, but when they don’t speak English, we communicate with each other with smiles and laughter.

The US Government allows American citizens to enter Cuba on a people-to-people initiative, arranged by a travel professional. This is a cultural exchange in which small groups (up to 16 participants) are escorted by a Cuban host to the island’s cultural treasures, seeing them in a way in which they are immersed into Cuban life during the stay. The trip includes a people-to-people visa, charter flight to Havana from Miami, hotels, food, ground transportation, touring, and immersive experiences with residents. The other way for Americans to get to Cuba legally is on an amateur athlete’s visa, which is how I’ve come. And while there won’t be another triathlon anytime soon, there’s a marathon in Havana on November 16, 2014, and Americans can sign up to enter. 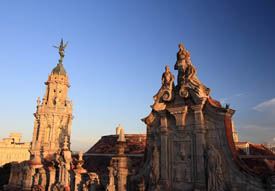 I don’t think there’s anything more immersive than training with real Cuban athletes. For the last four days, we’ve swum laps with them, biked up gigantic hills on long practice rides, and run together on the back roads and along El Malecón, an esplanade where giant waves splash over the concrete seawall. Opposite the Malecón are charming but crumbling colonial homes. We Americans have the best sports clothes and the most expensive road bikes, while the Cuban athletes have old-fashioned bikes, torn clothing, and very worn sneakers; but they have spirit and heart, and we love training with them. After the race, we’re all donating our gear to them so it doesn’t really matter who wins, because we all win.

Right now I’m lost and not winning anything. Why am I suddenly passing the beach? Just ahead, a man and woman sit on a ramshackle porch sipping icy drinks with fresh mint leaves — mojitos? “Excuse me,” I call to them. “Which way is the triathlon route?” They don’t understand. I continue running up the road until I am face to face with a man leading three cows on the road. “Hola!” I say. He grins and offers me a crumpled piece of bread. I put my hand on my heart to thank him just as the race official peddles up on a rusty bicycle and jabbers away in Spanish as he points for me to go in the opposite direction.

By the time I cross the finish line, the post-race party is in full swing. A live band plays such sizzling hot music that I put down my drink and get up and dance, my finisher’s medal bobbing around my neck. This is the best way to be lost.

How an Airline Fare Loophole Could Hurt Passengers​ – The New Yorker

Exclusive Offer: Free perks when you book to Alaska!