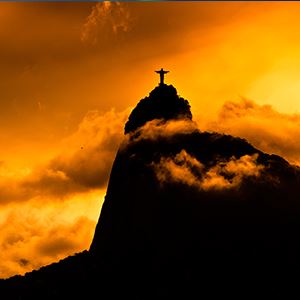 If you enjoy the Olympics, you’re going to love the 2016 summer games! For the first time in Olympic history, South America will host the event with Brazil’s historic tropical city, Rio de Janeiro doing the honors. Founded in 1565 and deep in tradition, Rio has grown over its 450 years into one of the largest and richest multicultural cities in the world. Over 2.8 million international tourists flock there each year, making Rio one of the most visited cities in the Southern Hemisphere and the most popular vacation destination in South America….and for good reason.

Known for its spectacular natural settings including sun drenched balneario beaches like Copacabana and Ipanema; the awe-inspiring Sugarloaf mountain with its cable cars and breathtaking views; Corcovado mountain and its giant statue of Christ the Redeemer standing high above its 14 million residents; and one of the largest city-surrounded urban rain forests in the world, Rio offers plenty of reasons to enjoy the great outdoors. The city is a metropolitan gem, known for world class art and cultural experiences including samba, bossa nova and its annual colorful Carnaval celebration. With over 50 museums, a wonderful combination of historic and modern architecture and a popular music, literature and theater scene, Rio’s considered the cultural capital of Brazil.

The city is also a sports enthusiast’s mecca and home to Maracana Stadium, once the world’s largest football (soccer) stadiums. Built in 1950, it held over 190,000 spectators. Since modernized, it now comfortably seats some 80,000 sports enthusiasts and will stage the opening and closing ceremonies and football matches for the 2016 Olympics.

In addition, 33 competition venues will be spread out across four regions of Rio – Barra, Copacabana, Deodoro and Marcanã. Each will be connected by a new high-performance transportation ring that will shuffle the 7,000,000 spectators to and fro that are expected to attend the Olympics’ 17 days of competition, along with 85,000 workers and the 10,500 athletes from 204 countries who will compete in its 306 medal events. A total of 42 sports will be contested, including golf and rugby, both making their grand debut after a century long absence.